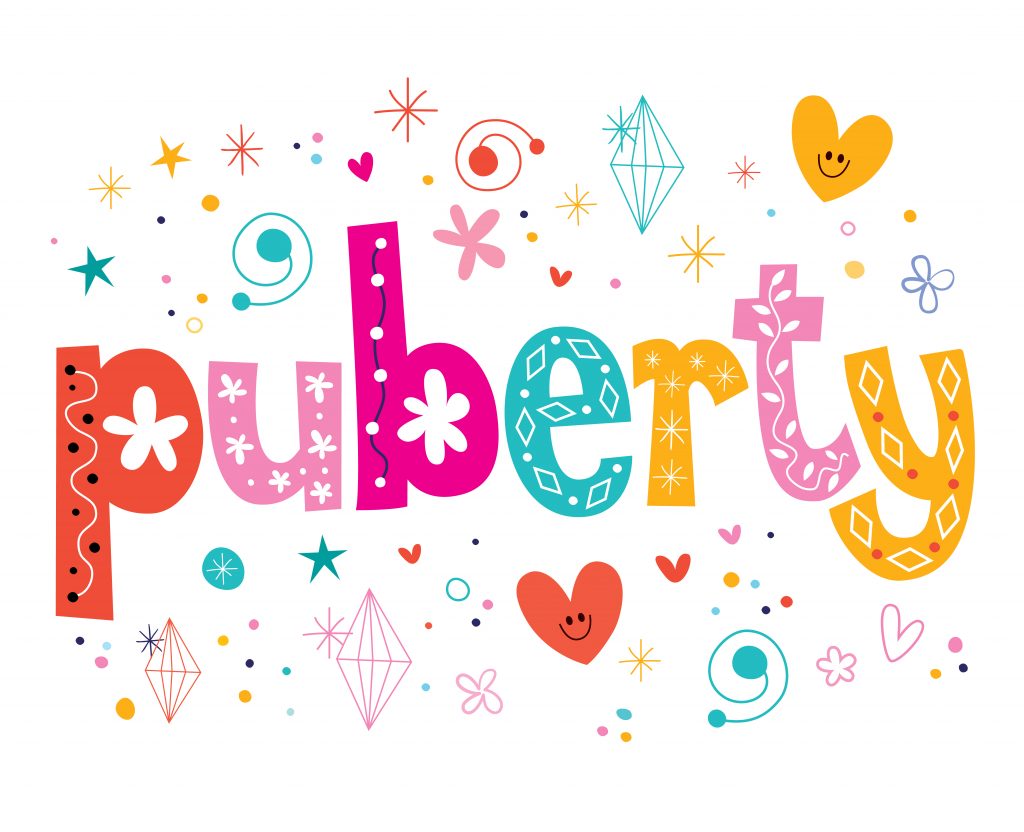 Puberty – fun times! It can be thorny and tough or smooth and plain sailing, every body is different and unique and every journey through puberty will be individual and experienced by each person in their own way. Some people start and finish young, some start young and it seems to go on forever, and for the late developers amongst us, they feel like they’re never going to start, and then everything seems to happen all at once.

I was one of these – at 13 I was a skinny little thing, one of the shortest girls in my class and weighing four and a half stone (my daughter weighed the same when she turned 8!). I watched all the other girls grow and change and felt like I was always going to be short and skinny and never going to get my period. At 14 I had started to grow, and by 15 (having almost given up and in near despair) I shot up to 5’8’’, suddenly one of the tallest, and my period finally came. For my daughter, this all may well start a lot earlier, we’re just different body types.
So what is puberty all about anyway?
Our current understanding of how it all works is based on the western medical model of an interplay of hormones and physiological processes. I’ll explain it this way here, but with the caveat that there are other understandings and explanations, Chinese medicine being one such alternative, and others will surely come.
For girls, at some point around the age of 8 to 10 (although it can happen earlier), the hypothalamus (a central portion of the brain) starts sending gonadotrophin releasing hormone (GnRH) out and, in response, the pituitary (the ‘master gland’, situated just below the hypothalamus) releases follicle stimulating hormone (FSH) and luteinising hormone (LH). FSH travels to the ovaries and stimulates the production of oestrogen.
You may recognise these hormones from the menstrual cycle, yes they’re the same, they start here and go on, stimulating the ebb and flow of the cycle once it’s established.
Now puberty is on its way, although physical changes can take one to two years to start after these hormonal developments begin. Boys start on average about a year later, and for them FSH stimulates the production of testosterone in the testes, which sets off all the puberty developments unique to boys. In both, it is the continuous monitoring and feedback mechanisms between the hypothalamus and the ovaries (or testes) that keep the hormones flowing and signal when the body is ready to start being fertile, which generally shows in girls as their first period.
(Just to be awkward, a girl can ovulate before starting her periods and so technically be fertile shortly before that first bleed, and conversely, can have her periods for a couple of years before she starts ovulating regularly. More individual variation, based on numerous factors…)
Once it starts, the female body starts to change and develop in some classic and well known ways…
There’s a lot to get used to, and it’s not surprising it can be an unsettling and uncertain time. As your body metamorphoses from child to adult, and your brain goes through equally big changes, it’s understandable that hyper self-consciousness seems to be the universal puberty experience. If you’re going through it right now and hating it, comfort yourself with the knowledge everyone else is feeling it too. And it will pass.
It’s hard anyway, but I went through puberty while my family were living in Indonesia. Men used to shout out ‘Hey sexy!’ and women stood in groups and pointed and laughed at me (and everyone else around who was white of course). It was a particularly delightful addition to the process I can tell you!
Whatever your experience of puberty, and whenever you go through it, eventually the process will be over. New challenges lie ahead of course, as well as new opportunities. It’s a rite of passage, a major threshold and a time you’re shedding one skin and deciding which one to grow next. No need to rush.